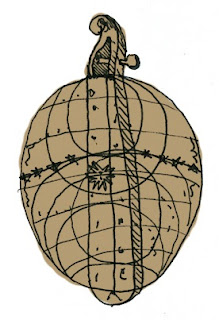 It has been a number of years in the making, but we're delighted to announce that Harry Smith's Anthology of American Folk Music: America Changed Through Music, the first book dedicated to this seminal collection of recordings, will be released by Ashgate Press in 2016. Ross and I are thrilled with the way the volume has come together, and we're looking forward to sharing more details as and when we can. Back in touch soon!
Posted by Thomas Ruys Smith at 2:42 PM No comments:

NEW Call for Papers: "America Changed Through Music" - The Book!

Following the success of "America Changed Through Music" on September 15th, we're now looking for contributors for what will be the first book-length study of Harry Smith's Anthology of American Folk Music in the six decades since its release. The official Call for Papers is below - please feel free to get in touch with any questions!

·         The Anthology in relation to Smith’s broader body of work

·         Analyses of individual artists and songs included in the Anthology

·         The Anthology and the development of American music

·         The Anthology’s influence on individual artists, writers, musicians, and beyond

·         The critical heritage surrounding the Anthology

·         Transatlantic dialogues in the Anthology

·         The Anthology and ethnic and cultural identity

·         The Anthology and its music in the twenty-first century

Posted by Thomas Ruys Smith at 1:54 PM No comments:

Ross Hair interviewed on Near 90.3 FM

The conference might be over, but never fear: we're still here to supply you with Harry Smith related infotainment! Ross Hair was interviewed about the 60th anniversary of the Anthology of American Folk Music by Dublin's Near 90.3 FM. The audio is available below. Enjoy!

Posted by Thomas Ruys Smith at 9:12 PM No comments:

We're very pleased to be able to share some images from the conference. First, here's a video of Ewan D. Rodgers performing "State of Arkansas" on the day:


And here are some photos of our performers, courtesy of conference attendee Delia Dattilo: 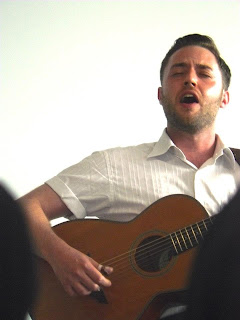 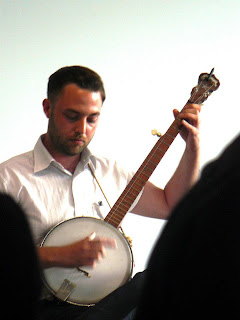 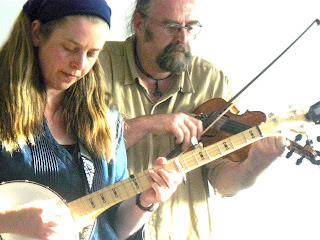 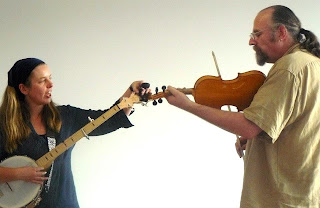 Posted by Thomas Ruys Smith at 8:54 PM No comments:

We couldn't be happier with the way that everything turned out yesterday - so we'd like to offer up a few final thanks. We need to thank our panellists for their fascinating papers - and, in many cases, for travelling a long, long way to be with us. We need to thank our musicians - Rapunzel & Sedayne and Ewan D. Rodgers - for bringing the day to a wonderful, fitting end. We need to thank everyone who came along to listen, watch and contribute from the floor. We need to thank all those who helped to publicise the conference in the months of planning. And we absolutely need to thank our sponsors again - proudly listed in the sidebar to the right - as well as Drew Christie for the conference logo, and Binary & The Brain for the design work, and the UEA Conference Office for all their amazing support. So, the day is done. But we're not quite finished yet. We'll be posting some video of the musical portion of the day at some point in the not-too-distant future (so yet more thanks - to James Maycock for the filming).

And we'll be back with news of another exciting project very soon. So stay tuned...

Posted by Thomas Ruys Smith at 8:43 PM No comments:

Stand by your (digital) radios: this Sunday, at around 11am, Thomas Ruys Smith is going to be chatting with Cerys Matthews about Harry Smith's Anthology of American Folk Music on her BBC 6Music show. Should be a perfect warm-up for our conference! We'll archive the audio here after the event.

Next week, Ross Hair is going to be talking to Ireland's Near 90 FM. Stay tuned for more details!


Update: You can now listen to the show on the BBC iPlayer. The interview starts at about 1:08, though this link should take you straight to the right point in the programme.

Update: For posterity, a rough and ready copy of the interview is available here:

Posted by Thomas Ruys Smith at 1:53 PM No comments: 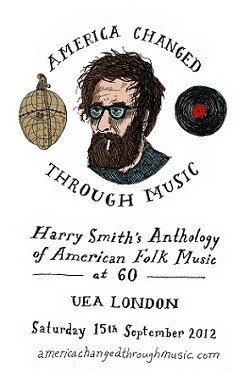 America Changed Through Music: Harry Smith's Anthology of American Folk Music at 60 is a one-day conference on Saturday September 15th 2012, hosted by the University of East Anglia's School of American Studies at UEA London, which will explore the impact and ongoing legacy of an extraordinary cultural artefact.

HARRY SMITH ON THE WEB